I used to throw really elaborately planned, multi-location birthday parties. Every. Single. Year. I love celebrating my birthday. Based on parties I’ve had in the past, you might think it was going to be my last big blow out. They’re a really big deal for me.

I’ve always thought it was unfortunate that most people never get to introduce their different groups of friends to each other… and if they do get the opportunity, it’s only at big life events like weddings and then never again. So my way of combatting this was to have big birthday parties where I would invite people from all parts of my life. 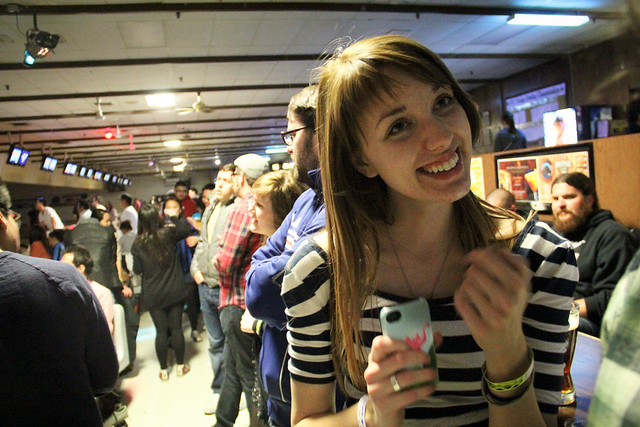 Dancing to Empire State of Mind by Alicia Keys on the jukebox at my 25th birthday at the historic Cedar Lanes in Fresno, CA. This alley has since been torn down.

It’s been a few years since I had done one of these big parties. I decided since I was having a milestone birthday in 2017, I should probably do something special.

I knew I needed a theme and a reason to wear a crown… but most of my stand-by ideas just weren’t working out.  Ideas were conceived and abandoned, nothing was sticking. It was already January and I had no idea what I wanted to do.

I had a moment of clarity while I was drinking a milkshake.

Most Sunday afternoons, I can be found at local drive-in diner: Retro Dog. One particularly sunny Sunday, it hit me: Retro Prom. It was perfect: an excuse to wear a crown (Prom Queen), a reason to dress up and a place to host it.

Me and Lisa looked like cotton candy when we stood next to each other.

We could have a no-frills dinner and add beers and champagne to make it a party. I knew they hosted birthday parties for kids at Retro Dog all the time, and I was glad the owners were as excited as I was to have my birthday party there. (I am just a big kid, afterall.)

It was really nice to have such a low-stress birthday party, people came and went as they pleased, and even my friends with kids could attend. It was exactly what I wanted my 30th birthday to be. I even brought crowns for friends that wanted to share in being prom queen with me.

Cory always spoils me with amazing birthday cakes, and this year he made me an upgraded version of Milk Bar’s birthday cake with Italian meringue buttercream frosting. Yes, it truly is an upgrade. I’m a huge Milk Bar fan, and I think this cake is better than the ones I’ve tasted in New York. (It’s all in the frosting, trust me.)

Everyone looked amazing decked out in their prom gear — Eva found an awesome frock, Joanna had an awesome bowtie and TAILS, Melinda’s dress even had a hoop skirt!

I’m lucky to have such wonderful friends and I’m so glad to be starting my next decade with such lovely people surrounding me. ❤️